Menu
You are here: 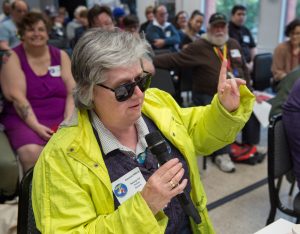 “For many people across the country and around the world, involvement in the self-advocacy movements has built self- confidence, supported self-determination, and provided opportunities for learning about and contributing to their communities and their countries.”
Bonnie Shoultz, Center on Human Policy (n.d.)

The concept of group self advocacy began in Sweden during the late 1960’s. People with intellectual disabilities began to form and run their own groups in order to speak up on behalf of themselves and others about the issues which had a direct effect on their lives. The idea quickly spread to Great Britain, Canada and the United States. The groups in these countries called themselves “People First,” groups because they felt that their disabilities were secondary to their personhood.  Shoultz (n.d.) 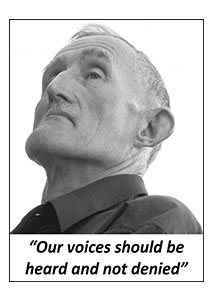 Self Advocacy is often referred to as a movement and shares similarities to the civil rights and women’s movements, in that they raised the issues of inequality and discrimination which led to the beginning of changes to the position of people with intellectual disabilities in our society in particular the closure of institutions.

Over the past forty years across Australia, members of self advocacy groups have joined together to combat injustice and to demand a better future for people with cognitive disabilities and people with complex communication support needs.

Self advocates have played a significant role in contributing to societal change at a range of levels. They have successfully campaigned to close institutions; they stood up in inquiries and spoke out against abuse and violence and supported others to do the same; they contributed to the development of safeguards; lobbied for accessible information; informed policy development; and spoke out against bullying and discrimination.

“Self advocacy has changed my life, opened up doors I never thought would be open to me and provided me with so many opportunities; I never thought I would be talking to politicians.”
Self advocate (National Self Advocacy Conference)

These campaigns have seen self advocacy groups work with all levels of government, community and disability service providers to ensure that people with disability have the same rights as anyone else in the community, including the right to have a family, meaningful paid work, decent accommodation, and real choice and control over all aspects of life.

Self advocacy groups also provide members with increased self-confidence to liaise with government by enabling them to develop a strong sense of collective identity as valued and equal members of society. By offering opportunities for skills development, friendships and mutual support, self advocacy enables people to develop a deeper understanding of issues and opportunities for engaging in strategies that promote social change. Self-advocacy is an important means of increasing social inclusion by enabling people to tell their stories and engage in partnerships with authority and confidence. These stories, when positioned in government policy contexts, are powerful and often a catalyst for engaging government officials in long term partnerships to strengthen policy making processes by making them more representative. 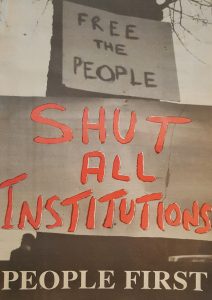 “We so badly need to protect the future of self advocacy. We don’t want to recreate history where funding comes and goes and groups disappear and all that knowledge and expertise is lost.”
Self advocate (National Self Advocacy Conference)

Arthur Rogers, in his former role as Executive Director of Disability Services, has often commented on his early days in the job, of wanting to find out what the important issues were for people with disabilities.  What better way than to go and talk to people directly and to learn from their lived experience about what really matters to them.

“When I first started in the role as Executive Director of Disability Services I felt I needed to learn more about what really mattered to people with disability.  And I just thought what better way than to go to people directly and talk to them and to learn from their lived experience. When you invest in people talking directly to you, you produce better decisions, better policies and better outcomes for people with disabilities, and who doesn’t want that”.
Arthur Rogers, Victorian Disability Services Commissioner (n.d.)

The power of group self advocacy then as a vehicle for change is now more widely acknowledged. With minimal or no resources or funding, group self advocacy has proven that it has the capacity to transform lives, to improve the quality of services provided through disability and mainstream systems and to change communities so that they are more responsive to the needs and aspirations of people with disability.

There is mutual interest here for government and self advocacy groups to work together to support the creation of an inclusive society. From a local government perspective, MetroAccess Project Coordinator at the City of Melbourne, Peter Whelan emphasises the important role that working with Deaf Blind Victoria has played in enabling council to deliver on its commitment to an inclusive Melbourne:

“The engagement helps to ensure that the City of Melbourne understands the needs of all people living, working and visiting our city; it helps us to be more responsive and to work alongside Deaf Blind Victorians to promote inclusion on a range of other fronts like the Metro Rail project and the redevelopment of the Queen Victoria Market”.
Peter Whelan, MetroAccess Project Coordinator, City of Melbourne (n.d.)

The partnership with government is also important for self advocates.  By developing relationships with key government representatives they are able to learn about the way government works and can position their work more effectively and develop strategies to influence policy, legislative and program reform.

“Self advocacy groups need to get to know public servants who are making decisions about YOUR life.  It’s important to find a number of ‘champions’ who will meet with you, talk to you and seek advice from you”.
Dean Dadson, Self Advocacy Resource Unit (n.d.)

These ‘champions’ can open doors for you so that there is potential to take a more ‘whole of government’ approach to complex issues and policy developments:

In Victoria the commitment to self advocacy resulted in the development of the SARU.

Self advocacy is also a source of connection for community groups.  Self advocacy groups are ‘go to’ places for community organisations that want to engage with people with disabilities to learn about what matters to them and to develop responses and opportunities that are personally meaningful and socially transformative.

‘The transformative power is in the group and the individual working together.  Having individual stories is so powerful.  There is power for the group and the individual when we write and sing together………..People want to be together; people want to be part of a community; part of a tribe where they feel safe and have access to something that is meaningful’.
Phil Heuzenroeder, Artistic and Executive Director, Wild at Heart (n.d)

Finally, it is important to recognise self advocacy groups are defined and driven by their members and are not necessarily formal organisations. Therefore attempts to formalise or standardise their practices or methods of operation may be met with suspicion and have the potential to distract from, and distort, their self advocacy activities. Bigby et al (2005)